This page provides useful information and resources for the members of the Food Policy Forum for Change. Click on the menu on the right to access information on upcoming and past events and a list of resources useful to develop sustainable policies.

RELEVANT TOPICS FOR THE FORUM

In the Food Policy Forum for Change, policy makers, implementers and advisors have the chance to exchange on relevant topics on how to boost a paradigm shift in the food systems of their country, at a national, subnational and local level. We identified the following relevant topics to start a discussion among the members of the forum:

Would you like to propose a new topic relevant for your context?

Please get in touch with us at

Scaling up Agroecology in the Himalayas together – Virtual event organized by IFOAM Organics International, World Future Council and supported by the German Federal Ministry for Economic Cooperation and Development (BMZ). 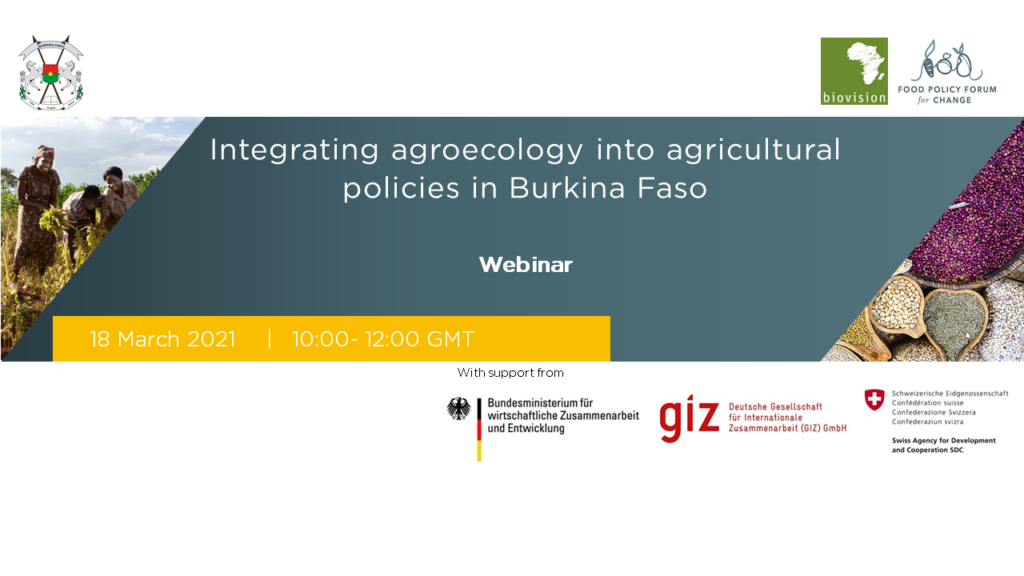 Key messages
1. The development of a national law on organic agriculture provides an enabling framework for the development of a revenue-generating sector, including support for exports, and demonstrates the government’s commitment to supporting the sector as well as mobilising support from technical and financial partners.
2. In the case of Madagascar, the national organic law was initially driven by the private sector and policy discussion gradually broadened to include domestic market issues and support for small-scale producers supplying the national market. One of the challenges in developing the national law was the introduction of participatory guarantee systems (PSG), which were met with resistance by some sectors.
3. The concept of organic farming territories aims to develop a territorial certification to limit the contamination of pollutants in a given region. It is based on a shared vision of all stakeholders of a territory to promote organic farming and can include other objectives such as revitalizing rural areas and local development.
4. In Senegal, the establishment of the platform “Dynamique pour une Transition Agro-Ecologqiue au Sénégal (DYATES) brought together about 30 organisations from civil society, research bodies, producer and cosnumer initiatives and local officials. In 2019, a national consultation conferred with over 100 producers, which led to the submission of a set of policy recommendations to facilitate a national agroecological transition. Some first policy decisions by the government include the reallocating of 10% of the budget for agricultural input subsidies to organic fertilisiers in 2021 and the appointment of a focal point within the Ministry of Agriculture.
5. In terms of funding, the national consultation in Senegal was financed by the DYATES member’s fees within the scope of possibilities of each member. In Madagascar, funding for the development of the national law was provided by a World Bank project and a variety of cooperation partners.
6. Regarding the financing of PSG’s, the discussions showed that there is very little experience of self-financing. In general, external technical and financial support is needed to implement a PSG. For example, funding can come from a reallocation of chemical input subsidies.
7. The importance of agroecological action research was emphasized. Funding needs to be strengthened to develop solutions to the dual challenge of food and nutritional security and the preservation of natural resources.
8. A possible strategy to increase the demand for agroecological prodcuts is to promote it through communication, information, trainings of stakeholders and consumers, as well as actions to link producers and consumers, for example through PSG’s. Certainly, this remains a major challenge.
9. At the regional level in West Africa, many politicians have been sensitised to agroecological approaches. However, concrete solutions and agroecological practices vary greatly depending on the territory and agro-climatic zone.
Resources

The recording of the webinar is private. Contact us to get acces.

This session at the BIOFACH’s eSpecial Congress on 17 February 2021 highlighted the role of four governments to develop conductive and innovative policy instruments to introducing and implementing agroecological and resilience principles. The session connected governmental efforts in order to increase learning between policymakers, as well as enriching the discussion on the role and instruments for country-level action.

More information about the event here

In this session at the Oxford Real Farming Conference, three leading policymakers from three different countries (India, Denmark and Uganda) presented good policy practices they are helping to put in place, which make possible the long-term transformation of the food and agricultural systems of their countries. The event explores the key entry points and drivers of transformational policies inclduing the multifacted crisis, climate change, health, and environmental pressures.

This webinar initiated by Biovision, IFOAM and the Millennium Institute focussed on direct exchanges between polciy makers. It aimed at providing a deeper understanding of existing approaches and legal frameworks to operationalise organic principles at the policy level with a focus on organic action plans and other type of supportive policy frameworks.

Several speakers emphasized the importance of building policy interventions that are bottom-up and able to involve a wider range of actors and stakeholders at the very beginning of each policy cycle, so that the policy processes become an exercise of co-creation and deliver more meaningful and effective measures. As they both underlined, it is key to have well-thought-out strategic plans in order to ensure a well-balanced mix of measures supporting organic production (“push”) and consumption (“pull”).

The creation of markets for agroecological products is key to facilitate the transformation of our food systems. This process is often driven by consumer movements (e.g. through campaigns) or producer groups (e.g. farmer associations). Yet, public policies can also contribute to creating an enabling environment. In this roundtable, four invited panellists discussed how public policies can enable, transform and consolidate markets for agroecology, based on the experiences in their regions.

The event was moderated by Céline Termote, Alliance Bioversity International and CIAT.

Agroecology is emerging in a very dynamic way in diversified nested markets. Markets for agroecology refer to a wide diversity of initiatives or networks that ensure that food from agroecological production is exchanged and traded between producers and consumers. Public policies, including financial and regulatory mechanisms, can create market conditions that are favourable to rural and urban agroecological systems and their value chains by: 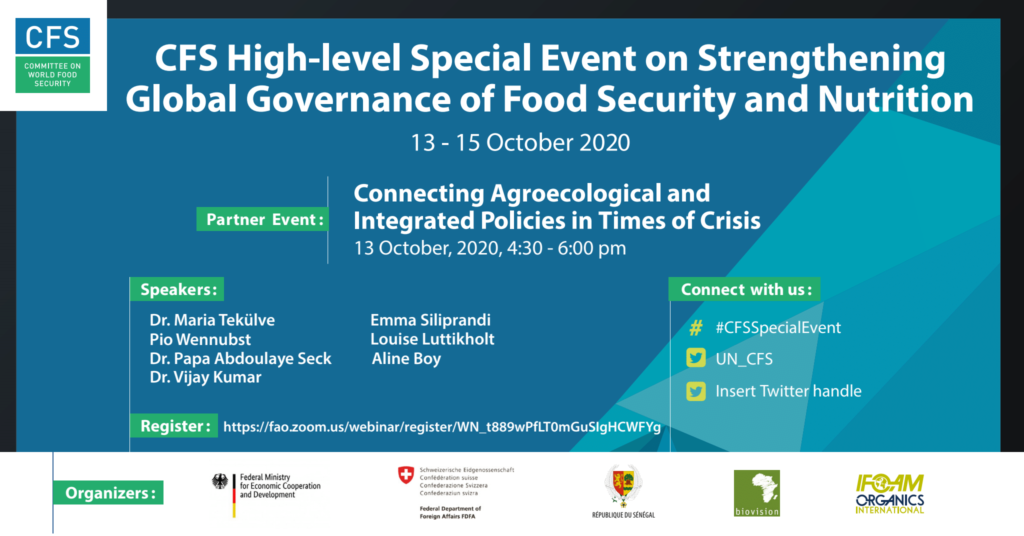 The Food Policy Forum for Change was officially launched during the side event “Connecting Agroecological and Integrated Policies in Times of Crisis” at the CFS High-Level Special Event on Global Governance of Food Security and Nutrition on 13 October 2020. This panel discussion showcased good policy practices aimed at introducing and implementing agroecological and resilience principles. It illustrated the key role of policymakers as agents of change when it comes to the long-term and resilient transformation of food and agricultural systems.

The event was moderated by Frank Eyhorn, CEO, Biovision Foundation.

We hosted a Q&A session with potential members, where we had the chance to introduce the Food Policy Forum for Change initiative and to answer some questions from particpants. The Forum is an interactive network of policy makers interested in making our food systems sustainable in the face of current global challenges. Through this network you will have the opportunity to meet, learn and get inspired by other policy makers via peer-to-peer exchanges.

Further information about the forum here

These activities are part of the initiative “Coherent policies for transforming food and agricultural systems – a peer to peer exchange among policy makers” led by a consortium of prominent organizations in the fields of sustainable food systems and support to agricultural policy processes: Biovision Foundation, IFOAM – Organics International and the Millennium Institute, with support from FAO.  The initiative is financed by the German Federal Ministry of Economic Cooperation and Development (BMZ) through Deutsche Gesellschaft für Internationale Zusammenarbeit GmbH (GIZ), and the Swiss Agency for Development and Cooperation (SDC).