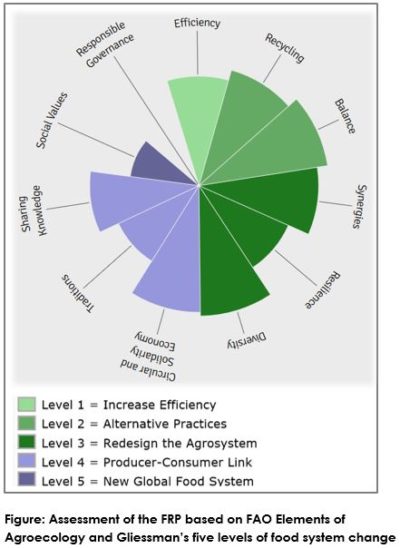 This example is documenting how strawberry monocultures turned into sustainable agroecosystems through a 30-year farmer-researcher partnership.

It all started with a research partnership between a farmer and a researcher for agroecological transition of the conventional monoculture strawberry production. Step by step, changes and improvements of the practices, thereby proofing the feasibility in the field, has been a successful approach to drive a sustainability transformation. Through adoption of the practices by other farmers and companies in the region and an increased consumer awareness, organic production has scaled up, leading to an 8-fold increase of organic strawberry production between 1997 and 2016. At the later stage of the transformation also direct marketing was a key to success to provide market incentives for the farmers.

Monterey and Santa Cruz counties account for about half of the total California strawberry crop, producing more than $953 million worth of strawberries on 13,063 acres in 2016. Strawberry production has traditionally been done in a very conventional, water and chemical input intensive way. In 2017, a key fumigant, MeBR, was nationally banned, increasing the demand for and transformation to sustainable alternatives.

The main goal was to redesign traditional large-scale monoculture strawberry production systems into an agroecological system through a researcher-farmer partnership by starting on one model farm and subsequent scaling improvements step-by-step and upscaling.

This example of a larger scale transformation of strawberry monocultures is indicating that with sufficient resources, time and support from (participatory) research, transformations of a system in a very sceptical setting- the approach was considered radical – is possible.

To provide a price incentive and compensate the higher labour costs, decreased input costs and a direct sales system were also a key success factor to support this transition

The challenges for the future are mainly environmental ones such as soil erosion, nutrient leaching, groundwater depletion and saltwater intrusion.