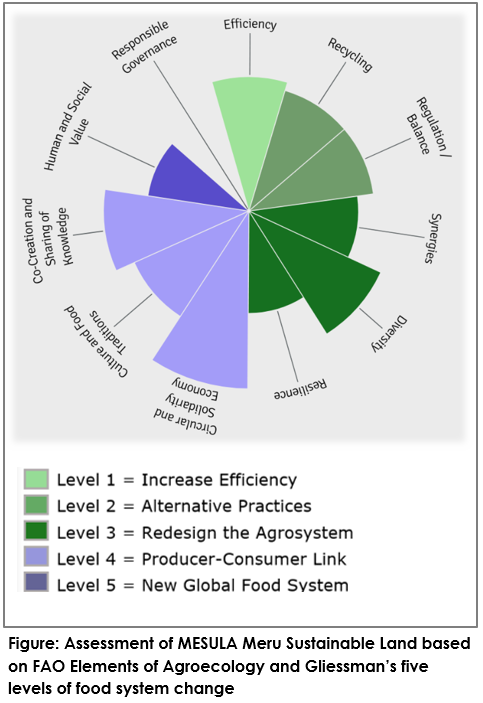 MESULA is a social enterprise committed to high-quality horticultural production, food security and protection of the territory in the area of Mount Meru, Tanzania. The idea originated from the close relationship of Oikos with the community of Arumeru District in Northern Tanzania.

This region is globally acknowledged as one of the places most affected by over-spraying of highly hazardous pesticides. They realized that organic agriculture not only means to  ban chemical pesticides and fertilizers from the fields but rather apply a holistic approach that considers any productive input and process in strict relationship with environment and agro-ecosystems, but also social and labour issues.

MESULA was created to provide an opportunity to farmers that are willing to approach a new concept of crop production and livestock management. They converted more than 20 acres of land to organically managed farmlands with a special focus on pest management and soil fertility conservation, working only with small scale farmers. The company is reducing costs and distributing profits in an equal way to all the subjects involved. Concretely, 50% of the price is going back to the farmers, instead of being distributed along the value chain among several intermediaries.

MESULA creates a short value chain for the production and supply of fresh fruit and vegetables to the local market with the goal to provide Tanzanians with sustainable, safe and nutritious food. In addition, they provide smallholder farmers with trainings and support for the transition to sustainable farming.

While agriculture is the main backbone of Tanzania’s economy, the country has over 44 million hectares of arable land with only 33 percent of this amount in cultivation. Almost 70 percent of the poor population live in rural areas and almost all of them are involved in the farming sector. Nevertheless, it is observed that export demand far exceeds the supply of organic agriculture in Tanzania, which raises expectations that organic agriculture has a promising future.

MESULA’s main objective is to contribute to enhanced food security and a fair development of rural communities while simultaneously providing the highest quality of food to consumers. Supporting the production of and access to healthy, pesticide-free food is at the core of Mesula’s vision. Their mission is to show that social equity, respect of human rights, fair economic conditions and a good health state can be tied to profitable businesses through organic production, while still preserving natural resources.

Even though farmers in Arusha were situated in a difficult financial situation, the motivation and willingness of the farmers supported and enforced a sustainable business model. MESULA’s organic produce supply chain has a direct impact on reducing chemical pesticides in agricultural farming practices. Small-scale farmers are reaping the social and economic benefits of the sustainable farming methods, through increased incomes and reduced health risks.

The government of Tanzania has expressed the desire to further promote the organic agriculture sector by supporting increased awareness and knowledge of both producers and consumers. MESULA therefore started engaging in policy discussions on local and national level. Moreover, they could improve on systemic resilience of agroecosystems to extreme weather events and climate change.