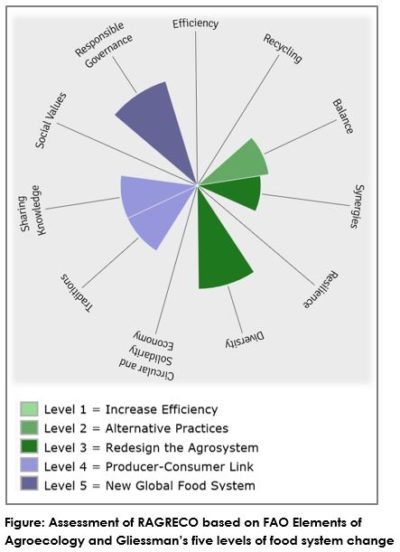 In 2010, the local government of the canton de Vaud in Switzerland adopted a regulation on agroecology (Règlement sur l’agroécologie RAgrEco 910.21.1), which became applicable in January 2011.

These are legislative measures and regulations whose principal objective is to address the public economic and financial subsidies to farmers, with respect to agroecological objectives. Those objectives are focused on the maintenance of soil fertility and on the conservation of biodiversity and landscape diversity. Interestingly, the regulation fosters collective actions and promotes the conservation of rural cultural-natural heritage at the cantonal level. Finally, it contains a clause on compensating production loss in the first few years of conversion to organic production.

The canton of Vaud is one of the main agricultural cantons of Switzerland and its agricultural production presents a wide range of vegetable productions and animals. The government traditionally provided significant subsidies for agriculture and price guarantees, to maintain a high level of domestic production. The context of liberalization and environmental awareness of the early 1990s had important consequences for Swiss agricultural policy, which took a completely different orientation toward recognizing of the multifunctionality of agriculture. Switzerland became in the recent years a strong consumer of organic products. In parallel, farmers seek to rationalize, specialize and develop quality labels such as Controlled Origin Certification in response to a decrease in prices of agricultural products.

The objectives of the regulation on agroecology is to define financial incentives for agri-environmental measures that reduce environmental impacts. The environmental objectives of the policy are focused on the maintenance of soil fertility, organic agriculture and conservation of biodiversity and landscape diversity. The scope of subsidies include individual voluntary projects, promotion activities, as well as collective projects and project plans.

The regulation on agroecology from the canton of Vaud is one the few experiences of an agroecological legislation under way throughout the world. One of the main challenges of such law is to link and coordinate regulatory measures between different legal fields, in particular between environmental law and agricultural law. It requires constructing a bottom-up “trans-law” that integrate both fields, and coordinate their associated institutions while respecting their autonomies.