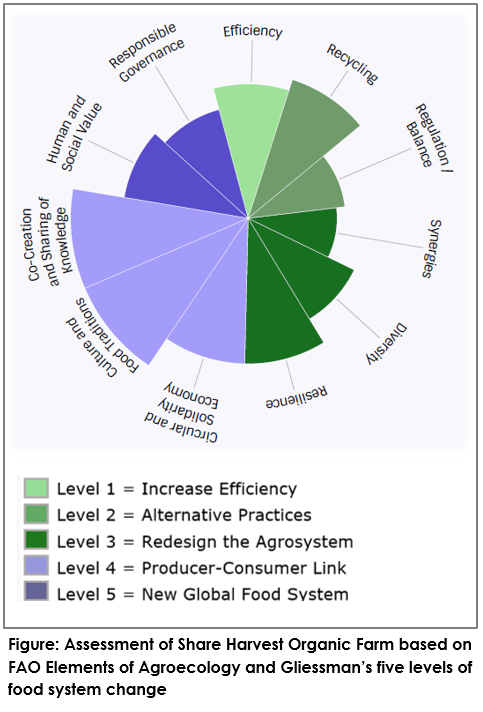 Shared Harvest is a public-interested, service-oriented social enterprise devoted to the promotion of ecological agriculture and mutual trust between producers and consumers. The enterprise does not aim at maximizing profits, but rather aims at the comprehensive development of society, ecology and economy.

To do so, they adopted a Community-Supported-Agriculture (CSA) model to cooperate with the local farmers in Beijing producing local, seasonal and organically grown vegetables and other food products. The CSA model consists of a community of individuals who pledge to support a farming operation, making the farmland community-owned. While growers and producers provide mutual support and share the risk of food production, members pay a fee and then receive a share of the harvest.

Agriculture is a vital industry in China, employing over 300 million farmers and ranking first in worldwide farm output. Agricultural modernization, as implemented in China since the seventies, is largely responsible for air pollution and soil degradation through the usage of fertilizers and pesticides.

Despite the rapid growth in output, the Chinese agricultural sector still faces several challenges as farmers often struggle to sell their agricultural products to customers. The long chain of intermediaries between the producing farmer in the countryside and the end-consumer in the cities often leads to a lack of trust and difficulties for farmers to foresee the demand and prices for different types of fruits and vegetables.

Shared Harvest Organic Farm targets three core goals: strengthening the relationship between citizens and farmers, protecting the income of farmers in ecological agriculture, and improving the status of food security. They are committed to build a bridge of trust, allowing consumers to enjoy healthy and safe food, while producers get a fair and reasonable income.

The project has been self-financing since the beginning while the income in 2018 was around USD 1.5 million with a profit of 10% used to build new green houses and to start new projects. Although the new CSA business model helped farmers to sell directly to consumers, individual farmers are still struggling with how to reach consumers and gain their trust.

In addition, especially young farmers who are returning to villages after receiving university education are under great pressure due to the low social status of farmers and the social biases against villagers. Although the farm does perform well in socio-economic measures potential is seen in the optimization of the biological synergies and a more complex crop rotation system.