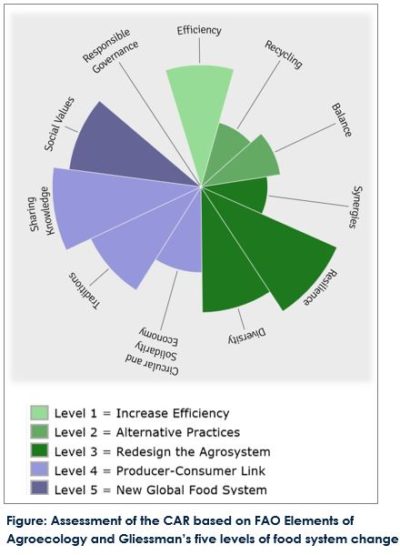 In response to severe economic and political crisis in Cuba, a farmers mass movement (Campesino-to-Campesino Agroecology Movement, MACAC)  has been transforming their productive systems by applying the principles of agroecology. Through this so-called agroecological revolution, the small farm sector in Cuba is achieving ever higher levels of production with lower costs, particularly foreign  exchange costs, as compared to  industrial chemical-intensive monoculture farming systems. The sharing between farmers (Campesino a Campesino) was central and farmers have been the agents of change of this transition process. Farmers were assisted by a network within higher education, supported by the Ministry of Higher Education which became a forum for participatory plant breeding, and supported Cuban Association of Small Farmers (ANAP) and the movement. A number of researchers completely changed their conception of agriculture, from Green Revolution to Agroecology, in the process.

From the 1960s to the beginning of the 1990s, Cuban agriculture was dominated by high-external input agriculture focused on large-scale monocultures of export commodities. Although the sector was provided with capital, agro-chemicals, and additional inputs through the Socialist trading bloc, the yields of rice and other key crops began to decline in the 1980s. Due to the large-scale monocultures as well as the heavy use of chemical fertilizers and pesticides, soils have been drastically degraded and farmers struggled to control pests over the long term. The radical transformation of the agriculture sector arose out of the crisis of the collapse of Soviet support and the US embargo on trade with Cuba. In response to this crisis, the small-scale agricultural sector in Cuba underwent what has been referred to as an “agroecological revolution”. The transition accelerated through the 1990s building on a burgeoning farmer-to-farmer movement (MACAC).

The goal of the movement was to spread good practices on agroecology through a farmer-to-farmer approach, with participatory plant breeding as an initial focus, but now much broader, to all practices. In this way, farmer can effectively take control over direction of experimentation and breeding, carry out their own experiments, and ensure the diffusion of seeds produced.

The transition to a more sustainable and organic food system has to be made easier for the farmers. Usually the first five years of the transition are very difficult, requiring untenable sacrifices from small-scale farmers (who often cannot afford these). One way of addressing this is a more horizontal relationship between scientists and farmers, with farmers and scientists working together in joint ventures to address the challenges of organic production and transition. Furthermore, new ways have to be found to ensure agroecological agriculture is more market oriented. This may include creating local seed companies managed by small farmers to promote and sell local seeds and other organic inputs. Such development could be supported by giving access to credits to green entrepreneurs who will transit from subsidy models to more inclusive business models.